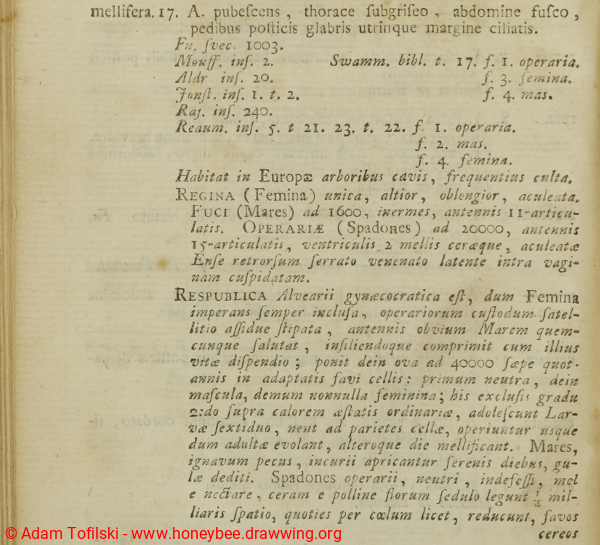 Currently used scientific name was given to honey bee by Linnaeus (also known as: Carl von Linné) in 1758, therefore, the full scientific name of honey bee is: Apis mellifera Linnaeus 1758. The first part of the Latin name: 'Apis' is genus name and the second part 'mellifera' is specific name (or specific epithet). Often 'Linnaeus' is abbreviated as 'L.' and the date is omitted. Apis mellifera in Latin means 'honey-bearing bee'. Lectotype of honey bee is in The Linnean Collection. Images of the lectotype can be found here.

There are many synonyms of this scientific name The taxonomy of recent and fossil honey bees (Hymenoptera: Apidae; Apis),
J Hymenopt Res
, Volume 8, p.165-196, (1999)
[2]. One of the synonyms was introduced by Linnaeus himself. He realized that more appropriate name should be Apis mellifica (in Latin: honey-making bee). However, according to International Code of Zoological Nomenclature International code of zoological nomenclature, 4th ed,
United Kingdom.
, London, (1999)
[3] only the first name is correct. The synonym Apis mellifica was often used in old scientific literature.

It is sometimes suggested that all subspecies names should be synonymized under species name (for example, according to this suggestion instead of 'Apis mellifera carnica' - 'Apis mellifera' should be used) A giant honey bee from the middle Miocene of Japan (Hymenoptera: Apidae),
Am Mus Novitates
, Volume 3504, p.1-12, (2006)
[4]

The common name (or: vernacular name) of Apis mellifera is: 'honey bee' sometimes spelled 'honeybee'. Both spellings are correct but I use here the first alternative in order to be consistent with other common names of insects Anatomy of the honey bee,
, Ithaca, p.334, (1956)
[5]. In search engines it is possible to search whole phrase by using quotation marks "honey bee" in order to distinguish between text containing words 'honey' and 'bee'. In order to distinguish Apis mellifera from other species from genus Apis it is sometimes called 'western honey bee' The taxonomy of recent and fossil honey bees (Hymenoptera: Apidae; Apis),
J Hymenopt Res
, Volume 8, p.165-196, (1999)
[2], 'common honey bee' The biology of the honey bee,
, Cambridge, (1987)
[6] or 'European honey bee'. The latter term is not precise as Apis mellifera occurs not only in Europe but also in Africa and Near East. 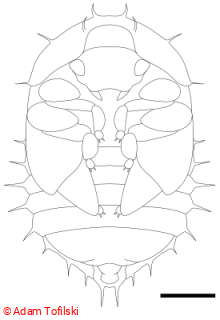 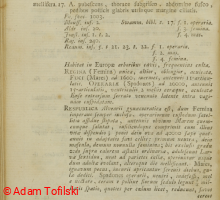