Honey bee (Apis mellifera) is an insect species living in colonies. In the colony there is usually one queen, thousands of workers and during some parts of the year variable number of drones. New colonies are produced by swarming. The colony lives in a nest which in nature is usually located inside a hollow tree. In the nest there is a series of vertical combs build from wax. On two sides of the combs there are hexagonal cells. 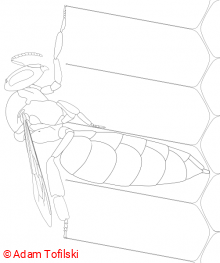